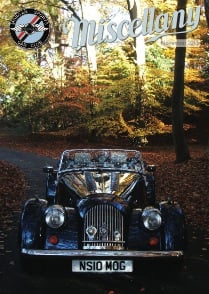 An intrinsic part of the Club has been its magazine.

The first magazine appeared in November 1951. Motoring and Morgans consisted of 17 pages of hand-typed foolscap, stapled together with a blue cover. It contained the names of the club's officers and a full membership list, reports on the Club's first events, notification of RAC recognition, details of future events, technical articles and so on. The only ads were private ones like “1938 4/4 4-seater, new hood, tonneau and tyres. Complete re-spray engine and transmission overhaul, the price £395”.

The July 1952 edition mentioned that two of the Club's events had to be cancelled that year due to outbreaks of foot and mouth disease. The club had recruited three members from the USA and was considering establishing a branch there.

A smaller, roughly-A5 magazine appeared in 1955. Monthly Miscellany was the heading on the first page and gave a clue to the origins of the name of our present-day magazine. Details of the AGM and dinner were reported, along with a driving test meeting at Honeybourne Airfield on 20th March. It also contained a form for subscription renewal – 30 shillings (£1.50p) – and a stamped (2 ½d (1p)) addressed envelope was included.

In 1960 the magazine was called Miscellany and went back  the larger size, with reports including that Lynden Simms and Roger Jones had finished in 125th place in the Monte Carlo Rally driving a Plus Four Coupé. They had made the third-fastest time on the special tests afterwards, beaten only by two Porsches.

By February 1966 the flat-rad on the cover has been replaced with a racing cowled rad, the same as used on the club letterhead. The editorial reports on the introduction of the 70 mph speed limit for a trial period of four months, saying that trial periods had a habit of becoming permanent (how true).

May 1968 and the magazine is now carrying commercial advertisements, three full-page and two half-page. There is much discussion on changing the Club's name, an article by Ralph Cross on spares problems for Series Is and another on the racing circuits around the country by Robin Brown. The August issue of that year was largely devoted to the introduction of the Plus Eight, at a cost of £1,477-18s-4d.

Spring 1970 and the magazine has shrunk again to A5 size, with a white cover sporting the Morgan Wing. This issue contains the results of the referendum on the name change.

The following year sees the new name, MSCC, on the cover and photographs. Until March 1975 the magazines were published quarterly or bi-monthly. These editions were supported by a stencilled monthly newsletter. From March 1975 it was decided to end these newsletters and to publish Miscellany every month, and this has been the case ever since.

By 1996 the magazine was becoming very thick so it was decided to scale up to A4. Landers had produced a colour photograph of Chris Rowe's +4 four-seater on the front cover for their penultimate edition, March 1997, as a ‘thank you’ to him on his retirement as editor. May 1997 saw a change of printers to Clarkeprint and regular colour covers and several spot colour and full-colour pages. In December 2001 the first 56-page full-colour edition was produced. Tighter control of the cost of the printing and advertising rates plus a much more hands-on approach by the editorial team has given us a much higher quality product at a lower cost.

What of Miscellany today? There are now regularly 64 full-colour pages, including around 16 pages of advertisements. Things have come a long way since Motoring and Morgans of 50 years ago.

To enhance the Club's facilities, this website was created to support Miscellany and enable members to have quicker and better access to events and suppliers in the Morgan world.