The highlight of the ‘Morgan Year’ for most of us – that is, those who are not organising it – is the annual meeting or ‘MOG’ (for Morgans Owners Gathering). The earliest record I have found of such an event was a proposed celebration of ‘50 years of Morgans’, to be organised by the Montagu Motor Museum on Sunday 31st July 1960, but the Club committee was not entirely happy with the date so further discussion was needed. A meeting did, however, take place and has done so every year since 1976.

This saw the first big club gathering, although the event was in fact the 25th meeting of The Bugatti Owners Club and Ferrari Owners Club. The Morgan 4/4 Club and Morgan Three Wheelers Club were co-promoters. It was to celebrate ‘60 years of Morgans’. The main venue was Prescott on the weekend of 6th–7th June. I remember that it was gloriously hot weather, with a turnout of over 300 Morgans. Most of us had never seen so many in one place.

1976 saw the first national event proper. This was to celebrate 40 years of four-wheelers and the club’s 25th anniversary. It was held over two weekends: 29th–30th May at Harewood Hill Climb, including a concours and cavalcade, and 14th–15th August at Shelsley Walsh, with a race meeting, another concours and a barbecue.

In 1977 the gathering at Ragley Hall was the first event to be called ‘MOG’. This was a one-day event on Sunday 8th May and contained all the usual attractions we expect to see. There has been a big club event every year since.

This was a return to Ragley Hall for two days, 20th–21st May.

This was held at Knebworth Park on 19th–20th May, with a test day at Silverstone on the 14th.

“The Morgan Clubs joint committee to celebrate 70 years of the Morgan” was held from 4th to 7th July at Beaulieu and Goodwood. This was the first event to be run jointly between the 3- and four-wheeler Clubs. I can remember working my socks off at Goodwood, and the heavens opened at Beaulieu.

Was at Elvaston Castle Country Park on 6th–7th June.

A bit of a change this time, as it was organised by the Factory. Billed as the ‘Morgan 75th Anniversary’ (their maths is obviously better than ours!), it ran from 21st to 30th July. The week also included some club-organised events, a Curborough Sprint and a Silverstone Test Day. There was a Sports Day at Prescott and concours plus spares fair at Eastnor Castle.

50 years of four-wheelers at the Three Counties Showground in Malvern, from 11th to 15th July.

Held over the weekend of 26th–28th June, just a bit north of Watford Gap at Beamish.

At The Cotswold Wildlife Park, held on 17th–19th June.

Back up north beyond Watford Gap again, and for the first time way over the border to Carbridge in Scotland, from 23rd to 25th June.

Back south at The Whitbread Hop Farm in Kent on 22nd–25th June.

Over the border again, this time to Wales and Margam County Park, 19th–21st June, for "Eisteddfod y Morgan", which means a ‘Gathering of Morgans’.

“Morgans in Staffordshire” at Weston Park, 2nd to 4th July.

A four day event organised by the Yorkshire Centre and held over 21st to 24th July 1994. A host of hotels were available in York and camping was provided on the Knavesmire, adjacent to the event site.

Thursday 21st: The event started with a 'Welcome Noggin for the early arrivals at the Rose & Crown in the pretty village of Askam Richard just west of York.

Friday 22nd: The evening event was held at the National Railway Museum.

Saturday 23rd: A choice of scenic runs through the beautiful Yorkshire Dales and Moors; followed by a formal dinner (or a seperate Disco) at the York Racecourse Banqueting Suite.

Sunday 24th: The main event held on the Knavesmire (York Racecourse); a huge car park for the near 1000 Morgans attending, with the usual Concours, Autotest and Pit Stop Challenge plus many other attractions.

Return to Beaulieu, 21st–25th June. This time glorious weather and a super event which included The Morgan Experience, a whole new concept that was a three-day all-in package precursor to the main event.

Up to the Midlands and Himley Hall near Dudley, 18th–22nd July. This was a co-operative event organised by three Centres – Midland, Warwickshire and Staffordshire – in a very short time.

Was held in Bath with a Roman flavour, many wearing togas and with plenty of earwigs on the campsite. The Saturday was very wet but the Sunday was a gloriously sunny day.

A change, two events in one year. The first, in May, was MANX-MOG – for the first time, the national event is held off the mainland on The Isle of Man. 250 cars, small by event standards but a great success. On the Saturday afternoon the road from Ramsey to the mountain was closed and we were let loose, it was magic. The second was HAL-MOG in Little Hallingbury. Who could forget the superb display celebrating 30 years of Plus Eights and Stansted Airport.

A return to Scotland after ten years, this time to Bridge of Allan, near Stirling. Legendary Scottish hospitality ending with a superb meal in Stirling Castle.

Another ten-year return, to the ‘Garden of England’, Kent at Canterbury University Campus. The Club began the new Millennium with a meeting that included a race meeting at Lydden Hill and a lunch in Le Touquet. It was also the first MOG for the Aero 8.

A golden jubilee meeting at Cheltenham Racecourse, including all the usual features plus a 50th birthday card and celebration for the whole club.

A meeting based around the Heritage Motor Centre at Gaydon, with a two-day grass autotest and an “Oxford Experience” which included, for each night, a dinner and B&B at St. Edmund Hall, one of the oldest of the Oxford colleges.

The Great North MOG 003 was based at Newcastle Racecourse with trips along the Tyne, a track day at Croft and all the usual MOG features – gymkhana, concours, scenic runs etc.

On the Welsh borders, DevaMog held the event at Oswestry, with canal trips and splendid scenic drives, proving that a small centre can organise a great event.

When the idea of another event on the Isle of Man, as part of the centenary of racing on the island, fell through, the 2002 team stepped into the breach. A return to Gaydon, this was originally going to be a one-day event but expanded to a full and successful MOG.

This was another year when the event should have been on the Isle of Man, but circumstances meant a last-minute change of plan. Volunteers from a number of centres came forward and, with the cooperation of Mallory Park, a very successful event took place over the last weekend of July.

Held at the Goodwood Circuit over the weekend of 10th–12th August, this was ably organised by the Brighton Centre. It proved very popular with the chance for members to drive on one of the world's great tracks – an opportunity that many grasped with both hands!

Cornwall hosted this year's MOG. It was based at the Trevelgue Holiday Park, Newquay and held over the weekend of 13th–15th June. The weather was fabulous and the event was a huge success. Many stayed on after the event to take advantage of the scenery and facilities available in Cornwall.

Centenary Year for The Morgan Motor Company Limited, so the Club did not hold a MOG. Instead, MMC arranged a series of celebrations during the year, with the main event being at Cheltenham over the weekend of 1st–2nd August.

Another quickly organised event in lieu of a cancelled meet in Scotland. We took the waters at Buxton with a successful low-key event around the Palace Hotel in Buxton on 18th–20th June. With activities taking place there and in and around the town, it proved a great success for members, visitors and inhabitants alike.

Was held in Newmarket, Suffolk at the Rowley Mile Racecourse on 1st–3rd July. More than 700 cars were in attendance on the Sunday and the weather was, fortunately, kind. The venue proved to be an excellent choice and the event was much enjoyed.

Not a MOG as such but an expansion of The Gaydon Auto Solo and called Morgan Activities Weekend.

A return to HopMog-land, Canterbury and the University of Kent, ending with a trip to France.

Move up north to the spa town of Harrogate for some Yorkshire hospitality.

Morgan owners came to North Wales with all sorts of expectations, and even the weather behaved itself. Whichever centre you are connected with, the one common factor is that you like to compete in one way or another. Events held included

Gymkhana, Pit Stop Challenge, Fun in the Pits, Auto Duo, Innovations, Pride of Ownership and a Raffle. There were plenty of stalls, good food and lots of fun.

We were so lucky to have been able to hold a MOG in such beautiful surroundings, but perhaps the real winners, resulting from your generosity over the weekend, were the two charities we supported – Hope House Hospice for Children and Brain Tumour Research.

Our vision for MOG 16 was for an event that could be staged in and around one venue, which had ample opportunity for scenic drives as well as visits to places of interest. For the Sunday, in addition to the usual trade stands, we set out to provide a fun and friendly atmosphere with plenty of opportunity to socialise in very pleasant surroundings. We also wanted to offer members a chance to take part in events that did not require any advance booking.

Horwood House proved to be an excellent venue, with the surrounding countryside providing good opportunities for scenic runs and interesting places to visit, with Bletchley Park of course being the most popular. In addition to the main MOG events, 123 members went cruising on the Grand Union Canal, 93 went on a steam train, 60 had afternoon tea at Woburn and over 300 visited the codebreakers at Bletchley Park

The CranMog team worked hard to deliver the event, with over 100 members, in addition to the MOG 16 committee, being involved throughout the weekend. SwanMog assisted by organising the Gymkhana and AngleMog provided a team to run the Auto Duo. 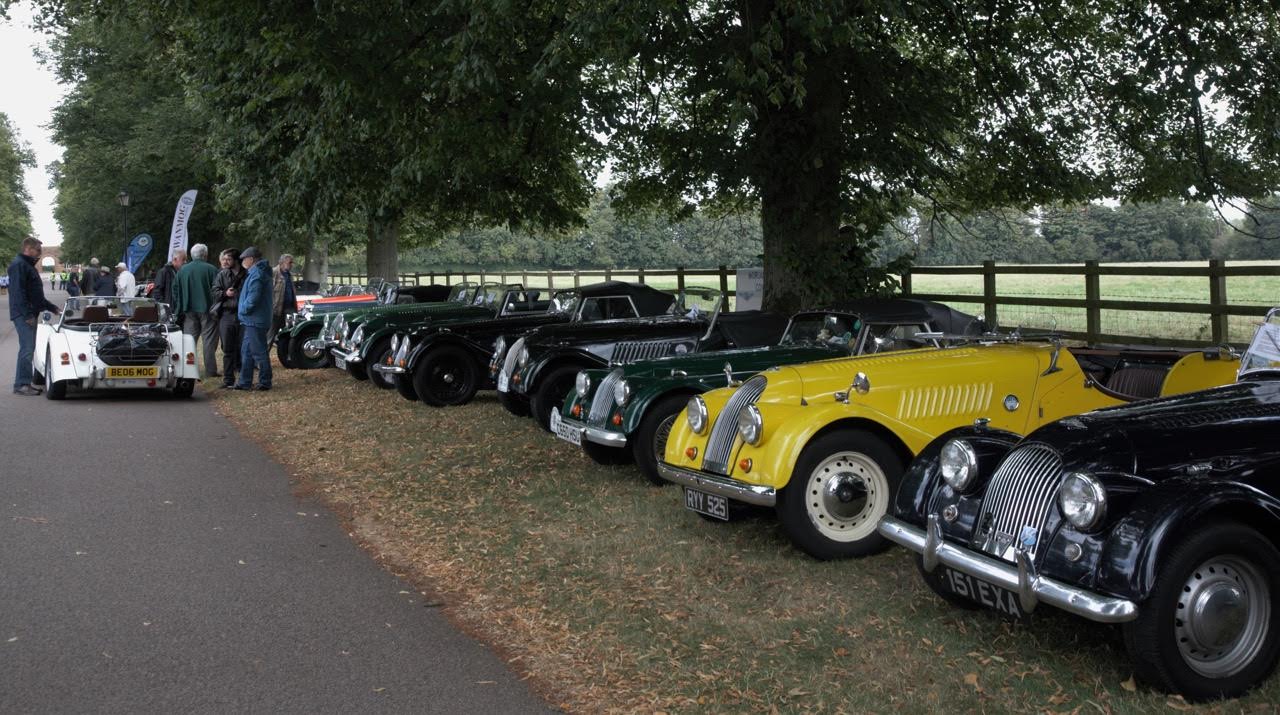 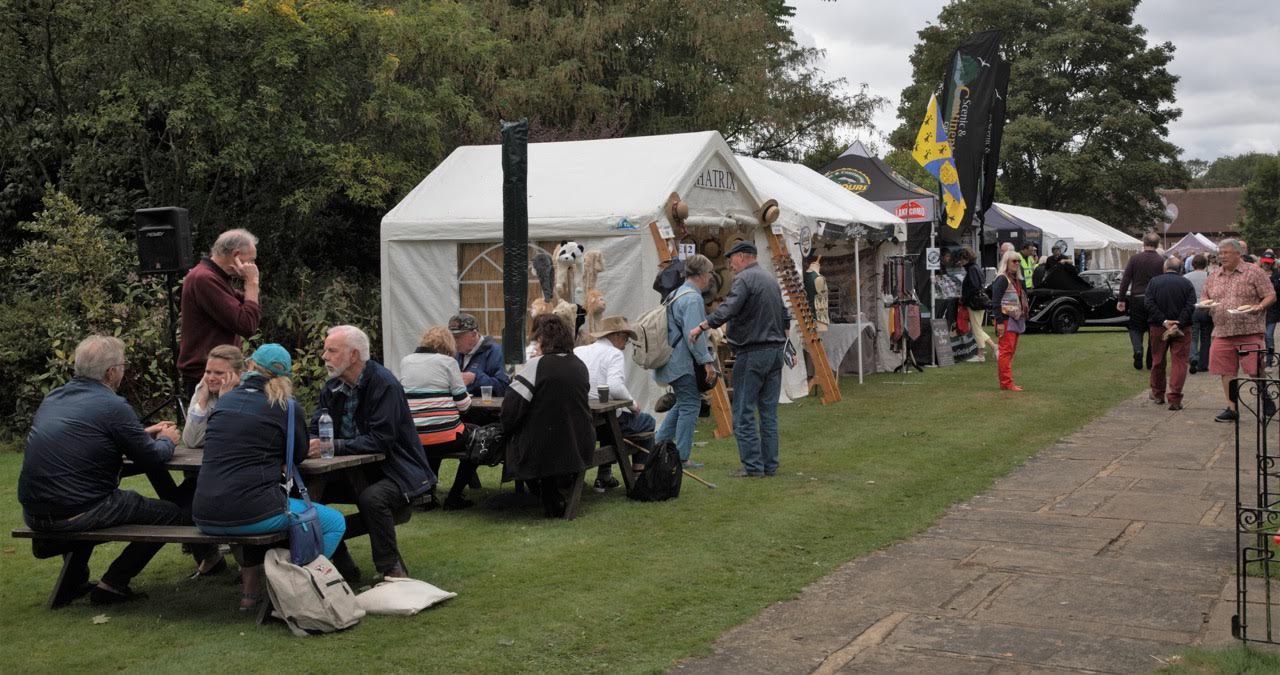 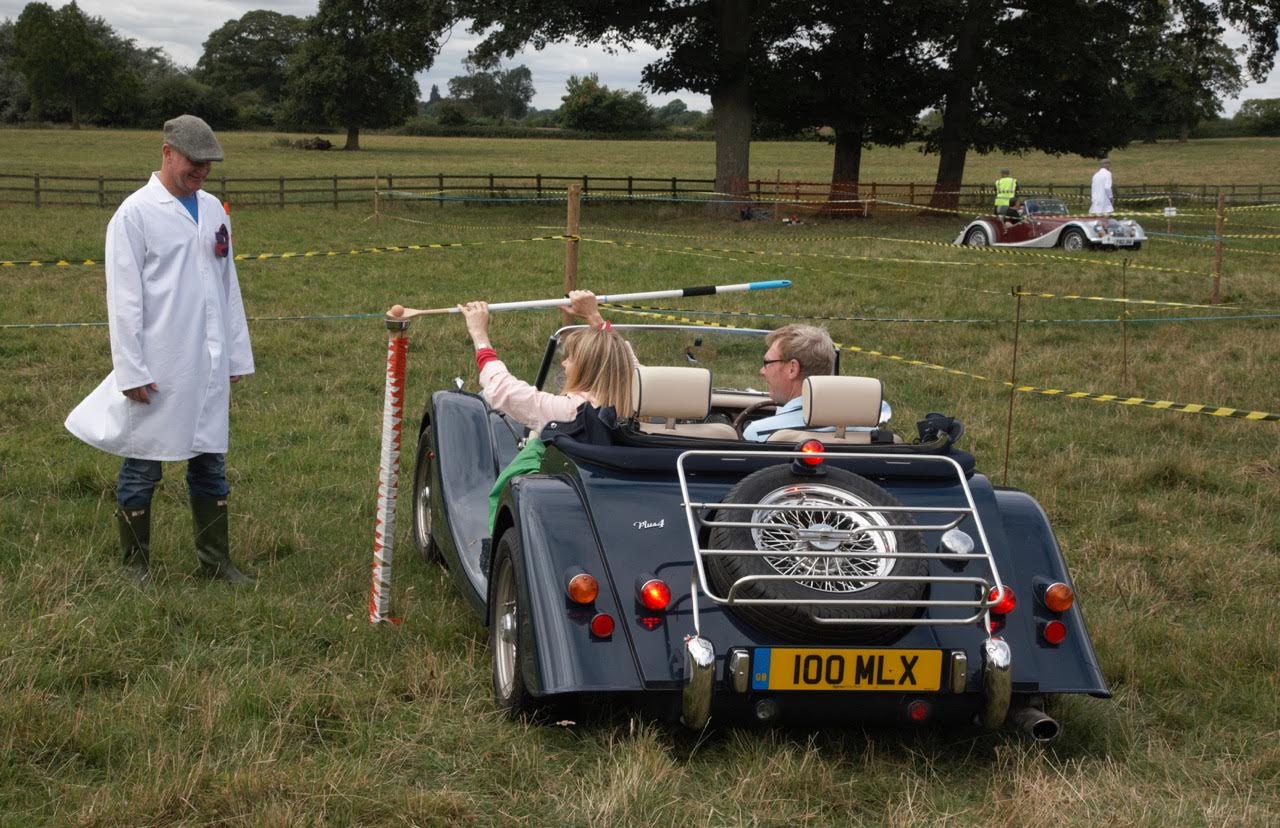